Miami Heat came into Game 1 with a balanced squad. However, it took two phenomenal Heat plays in the last moments of the overtime period to earn the victory. One was an offensive play by their star Jimmy Butler. The second one was a massive block by defensive player Bam Adebayo.

Before the start of the series, Butler said that his team is not the underdog of the Eastern Conference Finals. Playing in the bubble showed that there are no underdogs in the playoffs.

Heat fans expected Butler to be their hero in the closing minutes of the game. He was exceptional in the first 47 minutes of the game. He proved his worth with 25 seconds left. Butler got the ball at the right corner and scored a three-pointer to put them up by a single point. However, Celtics’ Kemba Walker sent the game into overtime by making one of two free-throw attempts after Marcus Smart fouled him. 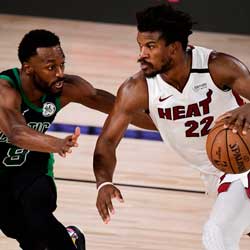 The first phenomenal play came five minutes later with Heat trailing by one. It was a tense moment for basketball betting fans. Butler drove to the bucket against Jayson Tatum and scored. He later told reporters that he thought it was his job to help the team win games at any point, especially in the fourth and overtime.

Then it was Adebayo’s time to shine. Based on basketball news reports, Bam showed his smarts and tirelessly down in the last seconds of the overtime period. Also, it was at the expense of Tatum.

Tatum drove down the lane and went past some of the Heat players. However, Adebayo met him at the rim to save the day for Miami. According to basketball betting odds, Boston is the favorite. However, the loss will not give them the home-court advantage in the rest of the series.