Braves Advance to World Series after Game 6 Win Over Dodgers

Eddie Rosario led the Atlanta Braves to victory in Game 6 of the National League Championship Series Saturday. As a result, the Braves advance to World Series. Rosario got a three-run homer in the fourth frame, which gave the team the lead.

It is the first time Atlanta is going to the World Series since 1999. Atlanta will face Houston in the Fall Classic, which starts on Tuesday. 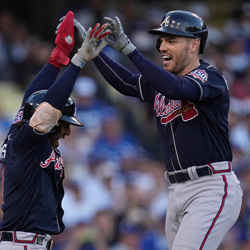 According to betting odds experts, AJ Pollock and Cody Bellinger earned runs for the Dodgers. Starting pitcher Walker Buehler gave up four runs out of seven hits in four frames. Also, he had only three days of rest. Max Scherzer didn’t start for the Dodgers due to arm fatigue.

The defeat ended the Dodgers’ seven-game winning streak in elimination matches. It started in the 2020 NLCS. The Dodgers are now facing an off-season with several free agents, including Clayton Kershaw, Corey Seager, Chris Taylor, Kenley Jansen, and Max Scherzer.

As per MLB and Doosan Bears betting sources, Atlanta got the lead in the first inning due to two-out doubles from Ozzie Albies and Austin Riley. Starter Anderson held Los Angeles in check until the fourth inning. The Dodgers had runners on first and second bases with one out. Bellinger got a two-out RBI to even the game at 1-1.