KBO games remain fan-less for now until June 14. It had to cancel its plan to bring fans back to games as the government announced stricter quarantine measures in Seoul. The government action came after a spike in coronavirus infections. Seoul and the surrounding communities had to go through enhanced social distancing arrangement until June 14.

Seoul officials want to avoid a second wave of the coronavirus. Last Thursday, there were 79 new cases, which was the highest total in two months. The Korea Baseball Organization opened its regular season last May 5, but it didn’t allow fans in the stands.

The KBO hoped that it could open its gates to fans soon. Its initial plan was to allow teams to sell 30 percent of the stadium seats. Also, fans need to maintain social distances within the ballparks. KBO scrapped the project after the announcement made by the Seoul officials. 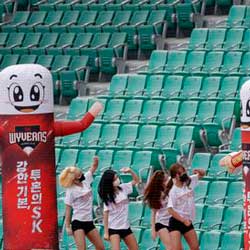 If Seoul couldn’t prevent the coronavirus from spreading by June 14, it would implement more stringent social distancing schemes. According to sports betting sources, KBO hopes that health officials can control the virus by then.

Sports betting websites across the globe have been following the KBO since it started its season. At present, KBO games are available in 130 countries through ESPN and its international network affiliates. As a result, the South Korean baseball league is enjoying a high level of popularity.

Sports betting sites now feature KBO sports betting predictions due to the lack of Major League Baseball games. People are wondering if the league can maintain its popularity even when the MLB returns to reclaim its spot in primetime cable TV.