Michigan basketball coach Juwan Howard would miss the rest of the regular season. In addition, the school suspended the coach for punching the opposing coach on Sunday. Also, the school fined him $40,000 for his action.

However, the suspension will only be for the regular season. Howard will be back during March Madness and other postseason games. In addition, the Big Ten fined Wisconsin’s coach Greg Gard $10,000 for his part of the altercation. 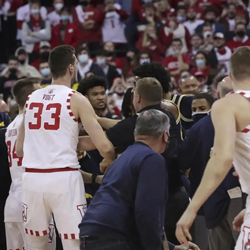 According to sports betting sources, Howard punched Wisconsin assistant coach Joe Krabbenhoft after the Michigan coach exchanged words with Gard during the postgame handshake. Michigan lost 77-63. Also, Howard was unhappy that the opposing coach called a timeout with a couple of seconds remaining.

Gard said he called the timeout to prepare his reserves for Howard’s pressure defense. After Howard hit Krabbenhoft, Williams, Diabate, and Neath started throwing punches as well. Although Howard didn’t apologize for his actions after the game, he showed some remorse after the announcement of his suspension.

According to betting odds experts, the Big Ten released a statement stating Howard and Gard violated its Sportsmanship Policy. However, it wasn’t the first time Howard got in trouble. Last year, Howard had a heated discussion with then-Maryland coach Mark Turgeon.

Michigan has five regular-season games left. Four of the games will be at home. Also, the team wants to qualify for its sixth NCAA tournament in a row. According to sports and gambling industry news sites, Michigan will face Rutgers on Wednesday and Illinois on Sunday.