Hawks vs Cavs game will be impressive because it is the battle of the two worst teams in the East. Also, both sides made several changes to their roster before the trade deadline. The game will be the final game before the NBA All-Star break.

Cleveland will host Atlanta, which will be their second game this season. In the first game, the Cavs won 121-118. They will face two more times with one of the games being the last match of the regular season. 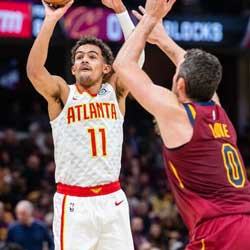 Both teams made significant changes to their lineup since their last game against each other. On the day of the trade deadline, the Cavs got Andre Drummond from Detroit. Although he had high numbers In his first game as a Cavalier, they lost to the Clippers in a blowout game, 133-92. Also, the Cavs are in a six-game losing skid.

Drummond told basketball betting sites that his trade is a long-term investment by Cleveland. He wants to motivate his teammates and keep a positive vibe in the locker room. Also, they will continue to work have and not quit on the season despite their standing.

Drummond joined his new team on Saturday and ran some drills. However, they didn’t have time to practice. As a result, he played the next day without any knowledge of the team’s system. The team had to figure out the plays that will work with Drummond in the middle.

On the other hand, Atlanta got Dewayne Dedmon from the Kings before the trade deadline. He didn’t have a hard time adjusting to his new team because he played two seasons with the Hawks before becoming a free agent at the start of the year, according to gambling website reviews and news sites.

Bet on Cleveland at +2

Our basketball betting pick is the Cavs. The Hawks are tired after the two-overtime game against the Knicks. Plus, Drummond will want to win big in front of his new home crowd.