The long wait was over for the Kim Kwang-hyun season debut in Major League Baseball. He had a no-decision against the Philadelphia Phillies. Also, he gave up three runs on five hits and one walk in three innings.

Kim started the 2021 season on the injured list because he had a back injury after several rough starts during spring training. Last Saturday, he had a brutal first inning. After retiring two batters, Kim allowed two hits. Also, he hit a batter with a pitch to lose the lead against Philadelphia.

He loaded the bases after he walked JT Realmuto. The excellent news for St. Louis Cardinals fans is that he struck out Matt Joyce to get the third out. Also, he had a hitless second inning. However, things started to be challenging again in the third inning. 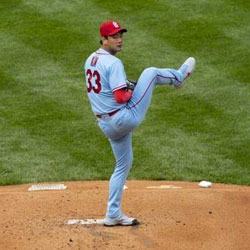 St. Louis got four hits in the third inning that included two home runs. Thus, Kim got the chance to make a plate appearance. According to iGaming Korea sources, he reached first base after a throwing error by Phillies’ third baseman. Also, the runner at third scored to give St. Louis a 6-1 lead over Philadelphia.

The Cardinals got three more runs in the fourth inning. However, St. Louis replaced Kim with Ryan Helsey at the bottom of the inning. They gave up a run in the fifth inning. The game ended with a score of 9-4 in favor of the Cardinals. According to free sports betting odds reports, Kim threw sixty-eight pitches and struck out four batters. He had an ERA of 9.00.