The Doosan Bears won their third Korean Baseball Organization pennant on Tuesday by beating the Nexen Heroes. In addition, winning this match made the Doosan Bears Secure the Best Regular Season Record.  Thus, by winning the pennant, they have also earned a bye straight in the 2018 KBO Championship series.

Doosan Bears Betting Fans were very happy to see the Bears capture their third KBO pennant.  On the other hand, offshore sports betting websites made a large profit by blowing out the Nexen Heroes 13-2. With 12 games remaining, the bears secured first place with an 86-46 improvement.

The SK Wyverns are currently in second place after defeating the LG Twins 16-7.  However, with a 72-58-1 record, they are 13 games behind the Bears.  Thus, even with 13 games left in the season, they will not be able to win the pennant. 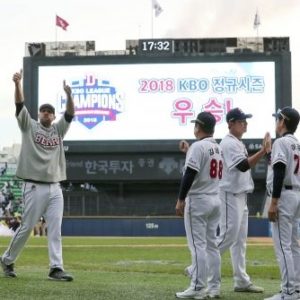 The Doosan Bears are looking to win their third KBO Championship.  They won the baseball championship in 2015 and 2016 but lost to the Kia Tigers in 2017.  In addition, this will be their third KBO pennant since they won it in 1995 and 2016.

The road to a third pennant race has been very successful for the Doosan Bears this season.  This is because they have been in the lead since April and only lost the lead for 1 day. Since then, they have had a record breaking season that is blew the competition away.

During Tuesday’s game, the Bears lost the first run but quickly came back with three runs in the bottom half. However, the Nexen Heroes took the lead during the fifth inning but lost it during the seventh inning.

The big excitement of the game took place in the seventh inning.  This is because the Bears scored 6 times which included a Grand Slam by Oh Jae-il.

Looking to bet on Baseball with a secure offshore sportsbook?  Then try VOBET.com, the #1 Sportsbook in the world!