The Korea Baseball Organization announced that the Futures League to use robot umpires in August. According to a KBO official, 20 Futures League games will use an automated ball-strike system this season. Then, the minor league will use the system for the entire 2021 season.

The KBO major league will use robot umpires in 2022. Although it is known as robot umpire, there will be no mechanical robot standing behind the catcher. Instead, the system uses radar to track the path of the ball. The home umpire will receive the data through an earpiece.

The Major League Baseball tested the electronic strike zone in the Atlantic League in 2019. The league planned to use the robot umpires in other minor leagues. However, the coronavirus pandemic canceled baseball leagues in North America.

Futures League To Use Robot Umpires 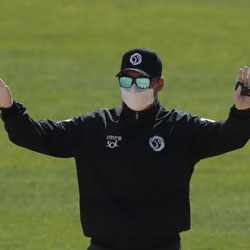 The KBO had several problems with umpires in recent seasons. Some teams and fans called out the umpires for inconsistent strike zones. Based on sports news reports, a veteran player complained about the performance of umpires in a TV interview last May.

As a result, the KBO demoted an umpiring crew of five officials consisting of four umpires and an alternate. They spent ten days officiating Futures League games, according to online sports betting sources.

Umpires in the KBO have a difficult job because they need to judge a spinning ball traveling at a fast velocity. Also, they need to make their call in real-time. If you bet on sports, you’ve probably seen a fair share of bad calls.

According to a study by the Boston University, MLB umpires missed around a fifth of strike and ball calls. That’s 20 percent of the time. With the automated system, it removes the human error in judging strikes and balls. Also, it will make the calls more credible.