St. Louis Cardinals Kim Kwang-hyun took no-decision after returning from his injury. He gave up three hits in 6 frames. Also, he allowed five walks, which was his worst in the season. On a positive note, he kept Miami to a single run.

Thus, the Cardinals came back to win the game 2-1. According to a sports forum, Kim hasn’t won a game since April 23. He had four straight decisions going into the game against the Marlins. Thus, he stayed at 1-4. Also, his ERA dropped to 3.72 from 4.05.

It was Kim’s first start since June 4. He stayed on the injury list for ten days after that game due to a lower back injury. Also, it was the same injury that kept him from playing at the beginning of the season. 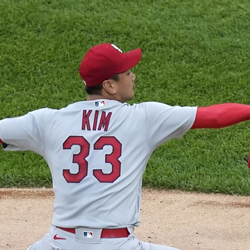 Kim allowed two Marlins on bases with two outs in the first inning. According to online sports betting reports, he prevented Miami from scoring by retiring Jesus Sanchez with a groundout. However, Kim found himself in trouble in the second frame after he walked Jon Berti.

Also, he walked the Marlins’ starter, Trevor Rogers, with four pitches. It was fortunate that Jazz Chisholm flew out to the right to close the inning. Kim also struggled in the third inning. Thus, it gave the Marlins the chance to score their first run via a walk-single-single. Adam Duvall, Miami’s cleanup hitter, came up with the RBI single. Kim managed to prevent another run via three groundouts as per iGaming Korea sources.

He had his first clean inning of the game in the fourth inning. In the fifth inning, he gave up a walk. His best inning was the sixth frame when he retired the Marlin that included two strikeouts.

St. Louis evened the score in the sixth inning. However, they replaced Kim with Genesis Cabrera at the beginning of the seventh inning.