Today, we take a look at the National League for a matchup between the Philadelphia Phillies and the Washington Nationals. While this MLB game is not a huge showdown between two baseball power team, it will be a profitable one. In this Phillies vs Nationals Betting Pick and prediction, our sports handicappers give you a complete analysis of this matchup.

In this matchup, the Phillies are going to Nationals Park for the first game of a Friday-night doubleheader. Despite not having the home advantage, baseball betting sites have the Phillies as the favorite team to win at -200.

Here are the current Baseball Betting Odds for the Phillies and Nationals Matchup according to the VOBET Sportsbook and Casino:

Phillies vs Nationals Betting Prediction and Analysis for 06/17/2022 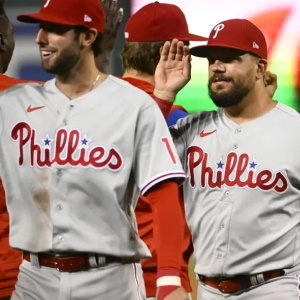 In this matchup, Philadelphia is in a favorable run-scoring environment ranking third in scored-runs (313), home runs (84) this season. In addition, the Phillies have one of the top 5 NL batting average and the highest OPS of .792 in road games.

According to online sports betting websites, the Phillies (33-31) have won eight of their previous ten games. In this matchup, Philadelphia will have pitcher Ranger Suarez on the mound. In addition, twenty-five-year-old righty Bailey Falter (0-2 4.20 ERA) will make his fourth career major league start.

As to the Washington Nationals, they are struggling with a five-game losing streak.  The only thing they have going for them is that the Phillies have the worst bullpen walk rate. Furthermore, the Phillies are one of the worst defensive teams in all of baseball.

However, twenty-three-year-old righty Joan Adon (1-10 6.95 ERA) is still struggling in the MLB. The main issue for Adon is control walking 36 batters in 58 innings.

Philadelphia will be playing without Johan Camargo who remains on the 10-day injury list with a right knee strain. However, through 64 games, Philadelphia ranks 5th in OPS and 6th in scoring runs.

the Phillies have won 5 of 6 games when they were the favorite team by at least -200. Therefore, we predict the Philadelphia Phillies will win with a final score of 7-6.