The Korea Football Association named the goal against Iran by Son Heung-min as the Goal of the Year. It is the result of online fan voting. Also, the South Korea vs. United Arab Emirates World Cup qualifying game is the Match of the Year.

According to sports news reports, the game between South Korea and Iran in the final qualifying round for the Asian region was scoreless, up to the three-minute mark in the second half. Then, Son got free via a through ball from Lee Jae-sung. He passed Sadegh Moharrami and kicked the ball into the net. 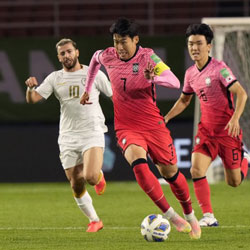 According to online sports betting experts, the match between South Korea and the United Arab Emirates was the Match of the Year. It was the first national football team match held in South Korea without any coronavirus restrictions. As a result, more than 30,100 fans were in the stands. Also, it was the biggest crowd to attend a sports event in the country during the pandemic.

South Korea vs. United Arab Emirates match was held at the Goyang Stadium on November 11. It was a memorable event in the time of the pandemic.