Think about a casino. You haven’t gambled in New York City if you’re viewing a rowdy poker table or a smoke-filled back room with tuxedo-clad dealers. The lone casino in the city is located on the outskirts of Queens, a short distance from JFK airport, and is surrounded by a Home Depot and the Aqueduct racecourse. It is a 6,500-machine e-gaming haven for gamblers wearing jeans and vibrant sneakers. Table games like blackjack, baccarat, and others are offered, but only online. Although there are Elton John tribute bands playing, there are no free beverages and no smoking allowed. In brief, the state’s Gaming Commission forbids Resorts World from adding any extras that would offer visitors a taste of what happens in Vegas or even in Atlantic City.

But gaming in New York may look very different in a few years. A ten-year moratorium on casinos in Long Island, Westchester, and NYC was overturned in April by state lawmakers (in an effort to support upstate casinos) and three full-service venues were given the go-ahead. (These are the casinos where you may play table games with callers and dealers as in Vegas, but where smoking is still prohibited.) New York State is charging $1 million for each application and $500 million for each license due of the immense potential for profit. By doing this, the competition is effectively reduced to the biggest, most well-funded players. 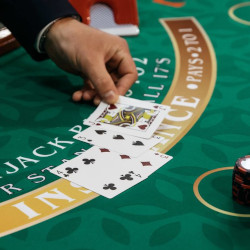 The commission will likely favor established facilities with a track record and the ability to add live table games, and two current casinos are front-runners: Yonkers’ Empire City Casino and the aforementioned Resorts World New York City in Queens, both owned by Malaysian developer Genting. There is now just one license available. And there’s a good chance it’ll move to New York City, where there are millions of prospective gamblers and little neighboring competition.

Some of the most well-known developers in the city are currently competing in a six-way contest. Related Companies, the primary developer of Hudson Yards, and Wynn Resorts, a Nevada-based company that builds casinos across the globe, were among the first to declare in September that they would be competing to build a casino on the undeveloped portion of Hudson Yards south of the Javits Center. A combined offer for a casino near Times Square was unveiled by SL Green and Caesars Entertainment in October. Steven Cohen, the owner of the New York Mets, is reportedly in negotiations with the Las Vegas Sands, the company started by the late Sheldon Adelson, who is best known for building the Venetian in Las Vegas, about building a Hard Rock casino in Willets Point near to Citi Field. A former Con Edison property in Midtown East, close to the United Nations, has been proposed by Stefan Soloviev, a descendant of the late Sheldon Solow’s real estate dynasty. And only last Tuesday, Thor Equities Group made a $3 billion offer for a Coney Island property in an official announcement. Steve Roth of Vornado has also suggested that an offer for Herald Square may be made.

The two most distant of these destinations from Manhattan, where the majority of guests and potential casino consumers will be, are Willets Point and Coney Island. In order to stand out from the competitors, West Side developers are relying on location. They would also compete against live dealer casino operations.