US sports broadcasting network ESPN approached the Korea Baseball Organization regarding the possibility of airing games in the US. However, there are no formal talks yet. It is still a long shot that ESPN air KBO games to the American market.

Just like Major League Baseball, the KBO postponed the start of its season. However, the South Korean teams are already practicing and playing intra-squad games. Some teams stream their Korean portal sites and YouTube. As a result, the games attracted baseball fans and sports journalists from across the globe.

With the number of COVID-19 cases dropping for the sixth straight day Tuesday, the KBO hopes it can start its regular season in May. Also, it hopes to complete its 144-game season. ESPN asked the MLB to connect them with KBO. Then the sports network contacted the Korean baseball league about airing games in the US. 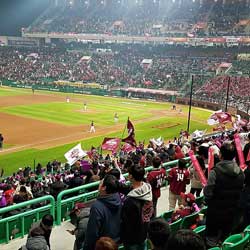 According to sports betting sources, the two parties didn’t talk about how they are going to broadcast the games in the US. Also, ESPN reached out to the local agency in charge of KBO’s overseas airing rights. However, the discussion hasn’t reached an agreement so far.

Based on the best gambling websites reports, the KBO failed to become popular in the US despite South Korea’s success in international baseball. The nation won the gold medal in the 2008 Olympics and 2nd place in the 2009 World Baseball Classic.

However, the North American audience views the KBO as a novelty. Also, most of what Americans know about it is through viral clips of bat flips and bloopers. Sports betting odds sites in the US don’t even have lines for KBO games in the past.

Things might change in May because the KBO will be the only pro baseball league that’s active. It will give sports bettors something to wager on.