Belgium is looking for a perfect record this year when it faces Cyprus during the final night of Euro 2020 qualifying. As hosts of Belgium vs Cyprus match, the Red Devils put their pride on the line to pull off a win.

The Red Devils already have first place heading to the game. If they sweep the group stage, they’ll get the top seed in Euro 2020. Winning 10 out of 10 in the qualifiers will wrap up the almost-perfect year for the Belgian national team. Their only setback this year is when they didn’t get to the Nations League Finals. 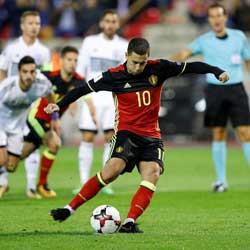 It is not a surprise that experts’ betting pick for Belgium vs Cyprus match is on the Red Devils. The squad already qualified for the European Championships finals with their current record. Also, they scored 34 goals and conceded only two in the tournament.

Eden Hazard and the rest of the steam have the momentum coming into the match after their 4-1 win against Russia. The latter also got a spot in next year’s Euros. On the other hand, Cyprus wants to end their Euro 2020 campaign on a high. They had two losses in October, which is why the betting odds are not in their favor.

Roberto Martinez will make several changes to the lineup to rest some of the big names. He has a big pool of talent that will allow him to use different players in various positions. However, he is likely to keep Hazard and Castagne as the starting wingbacks. People who bet on football expect him to play Boyata, Denayer, and Alderweireld as his backs.

Bet on Belgium at -3

Although Belgium already qualified for Euro 2020, it keeps on crushing its opponents throughout the qualifying round. Sports analysts expect the team to have another convincing win as the hosts.

Bet on soccer with VOBET, the best sportsbook in the world!