Korean sports betting experts expect the NFC West to be the best division in the National Football League. It lived up to the hype with three teams at 6-3. Two of them are the Arizona Cardinals and Seattle Seahawks. Thus, many football fans are looking forward to the Seahawks vs Cardinals match.

The Cardinals were in a two-game losing streak before their game last Sunday. They won via a Hail Mary pass from Kyler Murray to DeAndre Hopkins with two seconds left. According to free sports betting odds, the Seahawks are a three-point favorite. The over-under for the game is 57.5. 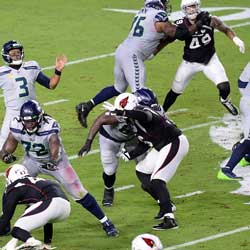 The Seahawks dropped two games in a row and three of the previous four since its bye week. Before that, Seattle won five straight games to start the season. On the downside, Russell Wilson hasn’t gone without a TD pass in consecutive games since the middle of 2016.

However, it is unlikely to occur now. The 31-year old quarterback is one of the NFL MVP award leaders after having multiple touchdown passes in the first eight matches. Also, he had at least four TD passes in four games.

Wilson is the TD pass leader in the NFL with 28. He needs two more TD passes to have 30 for four straight seasons. Also, Wilson is three TD passes shy of his career-high set in 2019. He is also second in passing yards, second in yards per game, and fourth in completion percentage.

Bet on the Seattle Seahawks at -3

According to our sports betting predictions, the Seahawks opened as the home favorites. They came from a defeat to the Los Angeles Rams. However, they will have what it takes to cover against the Cardinals on Thursday.