Genesis Gaming recently releases its 14th online slot machine Galaxy Stars, offering a maximum win of 5000x. The brand-new title is featuring Blazing Wilds. In which Wilds sticks on the row and moves horizontally to the left after each spin. And it only activates during one of its three features.

According to sources for the best online slot machines in Korea, Genesis Games wants to hit the core of what captivates its slot players. It is also through prototyping and experiential testing; the game developer set to focus on designing a good pace.

Furthermore, its players will experience an exciting rhythm in its gameplay. And to be able to get massive wins while building its momentum early on.

Galaxy Stars is a primary slot multiplier win in which the players can expect random bonus features during the play. The 3×5, 20 pay-lines online casino slot machine blasts out win of 3x, 5x, 8x. Plus, it builds up anticipation on its betting odds as it offers a maximum win of 5000x!

With every win, players are locking in a multiplier for the next spin. Besides, random wilds hitting on any spin and walking wilds in free spins. 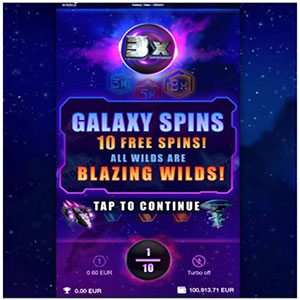 Galaxy Stars is an expedition through the tunnel on the space wherein players are to collect Nexus wins from the Black Hole. These wins can earn the 3x, 4x, 5x, or 8x through a 3, 4, or 5 of-a-kind on the reel. It is wherein the Nexus effect will only trigger in the next round.

During the expedition, players are to discover Lucky Stars wherein they can enjoy 3 to 6 Wilds landing on the reels. The Lucky Stars, however, is inactive during the Free Spin mode.

Finally, it also features the Galaxy Spin, wherein players will earn ten free spins when players hot three bonus scatter symbols. According to sources of online casinos in Korea, once the player is in Galaxy Spin, the background turns red. And the Wilds also will then become Blazing Wilds.