The excitement could not get any higher with Game 5 of the NBA Finals taking place on Saturday. NBA Finals betting fans are seeing a lot of excitement since both teams have won two games each as they face each other at the Phoenix Suns Arena. However, the big question remains as to which team will come out on top? Our Bucks vs Suns Betting Pick will give you the statistics and the best betting odds of winning this bet!

For both the Bucks and the Suns, this is a crucial game that could give them a crucial lead. According to Basketball betting enthusiasts the Phoenix Suns is the favorite team to win but not by much.  This is because the current VOBET Odds have them at -3.5. On the other hand, this will be a close game as both teams have had an excellent season so far.

Bucks vs Suns Betting Prediction and Analysis for 07/17/2021 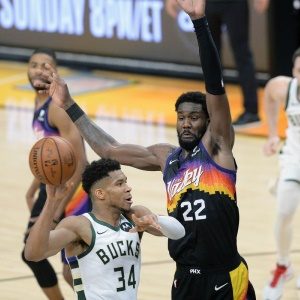 During game 4 of the NBA finals, the Bucks came back in the fourth quarter from a nine-points deficit. This was a surprise to many as they won with a final score of 109-103 for a home victory. Needless to say, this victory is making the NBA finals even more exciting.

During last Wednesday’s game, the Bucks did well by outrebounding the Suns by a 48-40 margin. This is in addition to turning over the ball over 5 times. In terms of scoring, Khris Middleton made 40 points on 15-for-33 shooting and by grabbing 6 boards. Thanks to this last game, the Bucks now have momentum in their favor with 2 back-to-back wins.

Then we have the Phoenix Suns who came to the playoffs as the no. 2 seed in the Western Conference. Een though they won the first 2 games of the NBA finals, they lost the last two games as well. However, they next game will on their home territory which is worth a few points on the spread. In addition, they also have All-Star player Devin Bookier who shot 42 points last Wednesday.

According to basketball betting information, the Bucks are 2-8 ATS in their last 10 games as a road underdog. On the other hand, the Suns are 7-2 ATS in the last 9 games as a home favorite. An interesting fact in this series is that both teams won both games at home. Thus, if this trend continues, the Suns have a good chance of winning this next game.

Phoenix will still be without Dario Saric due to a torn ACL on his right knee from Game One. However, they still have a better defense then the Bucks by limiting them to 40 percent shooting during game 4. As long as Booker does not foul out, Phoenix will have the advantage on Saturday. We predict Phoenix will win with a final score of 113-105.