Is this the end of the best dynasty in the K League? Fans are unhappy with the struggling Jeonbuk Hyundai Motors. The four-time reigning champions dropped from the top of the standings to fourth place in the last two weeks.

Last May 19, Jeonbuk was still the top team in the K League 1. However, they lost to Ulsan Hyundai FC. As a result, they dropped to second place. Their winless streak reached seven games last Saturday when they drew with Incheon United.

It took Takahiro Kunimoto’s last-minute goal to even the score. Thus, it continued the team’s winless skid to three losses and four draws. It was their longest winless skid since 2007. Jeonbuk went up to third place with the draw. However, it was only temporary because Daegu FC overtook them after a win against Gangwon last Sunday. 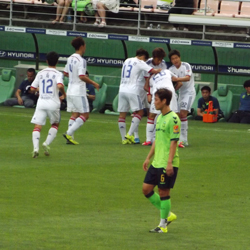 Last Wednesday, Jeonbuk suffered an upset to a Division 3 team in the Korean FA Cup Round 16. Thus, fans who bet on football are not optimistic about the team’s future. To make matters worse, their defender Choi Chul-soon suffered a knee injury. He would be out for several months. He joined Lee Ju-yong on the injury list.

Sports betting odds are not in favor of Jeonbuk. Choi is a vital member of the team at 34 years old due to his consistency. However, it is an indicator that the team is getting old. Other crucial team members are Kim Bo-kyung, Lee Yong, Hong Jeong-ho, and Han Kyo-won. All of them are in their 30s.

According to online sports betting sources, Jeonbuk hasn’t signed young players to fill the gap. On the other hand, other teams are signing young talents. Ulsan leads the K League one with 36 points. The team has some of the best under-25 players.