2018 finalists Vietnam finds itself in a dangerous position as the AFC U-23 Championship heads into its final matchday for Group D. Vietnam vs North Korea is a must-win for Vietnam if it wants to make it into the quarterfinals.

At present, Vietnam is in third place of Group D behind the United Arab Emirates and Jordan. In its first two games, it got goalless draws from the top two teams of the group. Its final group match will be against DPR Korea, which is already out of contention. Jordan and UAE will face each other in the other game. 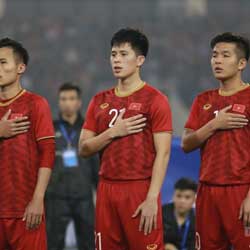 Vietnam U-23 squad performed well in the tournament, despite having two goalless draws. In recent years, they improved their defense. As a result, they were the runners-up in the last Asian Youth Tournament. Also, Vietnam finished in the top four of the Asian Games.

However, Vietnam needs to improve its offense. They earned two points out of two games in the current tournament. If they win the game, they have the chance to qualify for the next stage. That’s why they need to win against North Korea, according to football betting analysts.

On the other hand, North Korea performed poorly in recent tournaments. They lost their last two games to UAE and Jordan, scoring only a single goal. Many sports wagering sites expect them to lose against Vietnam.

Vietnam will win the game with the betting odds in its favor.