Texas Rangers’ Yang Hyeon-jong will start in an MLB on Wednesday after several impressive relief performances. The team made the plan known late last week that Yang would be the starter of the 3rd game in the series against the Twins.

Yang will replace starter Kohei Arihara. The starting pitcher is suffering from a callus on his finger. It is the first time that the South Korean pitcher will be the starter after signing a minor league deal with Texas in February.

After joining the Rangers’ roster last week, he served as the reliever in two games where he allowed only two runs and a 2.08 ERA. 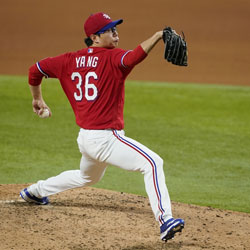 According to baseball betting reports, Yang played fourteen successful seasons with the Kia Tigers in the KBO. The Rangers invited him to their spring training and signed him up in February.

The 2021 MLB season started in early April. According to online gambling sources, Yang has been part of the alternative training site or taxi squad since then. The taxi squad serves as a temporary roster for top prospects and reserve players who teams can call up to the major leagues.

The MLB designed the taxi squad to help big league teams move their players up from the minor leagues, which postponed their 2021 season because of the pandemic. Last week, Doosan Bears betting experts learned that the Rangers promoted the South Korean pitcher to their main roster. Thus, the team bought his contract from the taxi squad.

Yang will earn $1.3 million this year and a maximum of $550,000 in incentives. Rangers’ manager Chris Woodward said that Yang has been impressive as a reliever. Also, he faced two of the best lineups in baseball today and wasn’t bothered by them.