We are now heading into the second part of the Premier League season after many disappointments, contentment and victories. No matter how their team did, football betting fans are eager for more as the Premier League continues. This Saturday, Chelsea will host Brentford at Stamford Bridge in a match to consolidate their position. However, Brentford keep that from happening?  Let’s find out what the experts have to say with our Brentford FC vs Chelsea FC Betting Pick and prediction.

In this matchup, Chelsea is the big favorite with a 17-8-3 record and is by far the better team. According to betting odds, Chelsea is the money line favorite at -300 while Brentford is a +950 underdog. However, a draw for this match is ranging between +370 to +410 with a +400 median. 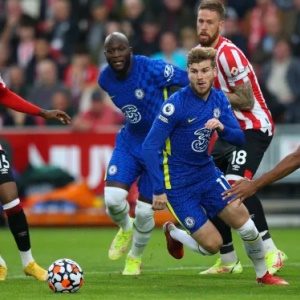 So far this season, Chelsea has been playing very well earning them the third position in the ranking. Sports betting experts agree that after 6 consecutive victories, they are a strong contender for the Premier League Championship title. However, they will need to solidify their position if they want to overtake Liverpool and Man City.

In their last Premier League game, Chelsea won 1-0 against a struggling Newcastle team. The defense for Chelsea has been among the best in the Premier League with allowing only 19 goals so far. In addition, the goal difference for Chelsea is sitting at a +38 on the year.

On the other hand, Brentford FC began the season as a strong contender. Unfortunately, this is no longer the case as they sit at number 15 in the rankings with 30 points. Their currently have an 8-6-16 record and are barely holding on.

Brentford is coming here after getting a loss in their last match. The loss was against the Leicester City squad and came by a score of 2-1. When it comes to scoring goals, Brentford only has 33 goals for the year with 20 assists for those goals. In terms of defense, they have not been doing well either giving up 47 goals.

In terms of offense, Chelsea is definitively superior to Brentford. However, the defense of Chelsea is not perfect and has been beaten in the past. It is not an exaggeration to say and it will happen again in this match.

Chelsea has won each of their last four games against Brentford, keeping clean sheets in each of those victories. Therefore, we predict Chelsea will win with a final score of 2-1.