Video Poker is a single-player game that takes the edge off poker. Unlike the traditional poker wherein players sit around the poker table, there is only one player up against a computer. Players will be paid accordingly to the paytable of each game and according to the minimum hand. Learn how to play video poker on the comforts of your home with our online video poker tutorial for beginners.

Best online casinos offer online video poker, as all major software developers have their variants. Most of the online video poker versions adopt the 5-card poker game rules. The only difference of online video poker is that there are no wagering rounds in between the dealt cards as players will only place a wager at the beginning.

Although video poker is a single-player poker game, some variants have a dealer. In this case, players will have to beat the poker hand of the dealer to win. 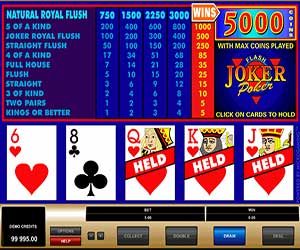 There are two types of video poker games. The most popular video poker games offer a single-player poker experience, including 5-card draw poker games. These are found on both land and online casinos as per casino forum sources. Also, this type includes Jacks or Better, Tens or Better, Joker Poker, Deuces Wild, Joked Deuces Wild, and Bonus Poker. The second type involves the player and the dealer, such as Caribbean Stud poker, which can only play on online casinos.

Despite having numerous variants, online video poker game starts with players place their desired stakes. Players choose a “coin” by clicking on the denomination on the screen of the game. Once they put the wager, players click on the “Deal” button.

When the players are done choosing the cards, they will click on “Draw.” Then, they will get replacement cards for the discarded cards to form the final 5-card poker hand. Players will then be paid according to the paytable of the game and the bet they have placed.

If a player decides to call, another bet is placed equal to twice the original bet. And the dealer’s final poker card will be revealed, then the showdown will take place.

For the dealer’s hand to qualify, it has at least an Ace and a King. If the hand does not qualify, the player will win regardless of his hand. Some games might also offer a progressive jackpot when players have a royal flush.

The minimum paying hand is the poker hand that players will have to be eligible to claim a payout. It differs from one game to another, depending on the rules of the game and other features.

The wild card is a feature offered at some, but not all video poker variants. It is always the Joker or the Deuce. It can be a substitute for any other card from the deck to help players have a winning poker hand.

Online video poker follows the same hand ranking rules as regular poker with Royal Flush being the highest hand. Also, it is the hand that matters of the value of the cards forming it.

The betting odds at the payout of online video poker will differ from one version to another. You should always place the maximum bet because it gives you a chance to win the jackpot prize for a royal flush. If you bet with 1 or 2 coins and get a royal flush, the payout will not be proportionally equal. There is also a lot of online video poker offers their bets in denominations. It includes bets from 0.25, 0.50, 1, 2, 5 and even 10 and 20.

Play Video Poker with VOBET, the Best casino in the world!

Previous Post What is a Future Bet?
Next Post Wynn Resorts Las Vegas To Resume Operations Without Poker