Many football news sites have already picked the winner in the Tottenham Hotspur vs Newcastle game even before the opening whistle. In fact, the Spurs won their last four encounters. As a result, Tottenham is the obvious favorite for the match.

Tottenham has an interesting start to their Premier League season. They won against Aston Villa during the opening weekend with 31 total attempts on goal. However, they needed two goals from Harry Kane in the final four minutes to get the 3-1 win over their opponent.

Their second game was the opposite. They conceded 30 shots on goal to Manchester City. However, they managed to secure a draw with Man City. As a result, they are second in the Premier League for average attempts on goals. Also, they are second in average shots conceded. 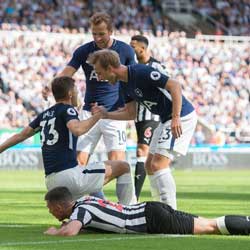 The Tottenham Hotspur vs Newcastle game gives the former the chance to normalize their statistics. Although two fixtures are not enough to measure a team’s potential for the entire season, there are troubling signs for Newcastle.

Soccer betting prediction sites expected Newcastle to lose against Arsenal during the league’s opening weekend. However, their 3-1 loss against newcomers Norwich City surprised a lot of fans.

It seems like Steve Bruce has a lot of work to do this season. As a result of the bad start, his name tops the list of managers to be sacked in the Premier League. In addition, they haven’t scored against Tottenham in the last four games they played against each other.

Bet on Tottenham Hotspurs at 27/4

Son Heung-min is back after a three-game ban. He will help his side get the better of the strangling Magpies to a 3-0 score, according to the best gambling website.

Bet on the Premier League with VOBET, the best sportsbook in the world!