The South Korean National Football team had high hopes for this year’s Asian Cup.  This is because this is the best team they have had in years under the leadership of coach Bento. In the end it was not enough as South Korea loses to Qatar 1-0 in the 2019 Asian Cup.

Qatar owes its victory to Qatar midfielder Abdulaziz Hatem who made a long shot during the 79th minute of the match. Furthermore, this victory reinforces their impressing record at the Asian Cup with 12 goals while conceding none.

For Korean football betting fans, this is a huge upset and disappointment.  This is because South Korea came to the AFC Asian Cup as a favorite to win the tournament.  On the other hand, Qatar was mostly seen as an underdog.

A Slow and uneventful first half 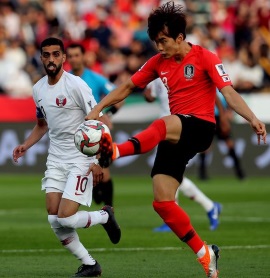 Needless to say, the first half of the game between South Korea and Qatar was uneventful. In addition, sports gambling experts thought that Son Heung-min, the Tottenham star would be the first to score a goal.  This is because after the game began with chance at both ends, Son, began to impose his influence. However, no goals were made during the first half.

The Qataris came out with more attacking intent in the second half of the game. However, there were almost immediately caught on the break with Hwang Ui-jo forcing a save out of Saad Al Sheeb.

The defensive midfielder’s left-footed shot came out of nowhere with only 12 minutes left in the game. The ball flew past the Kim Seung-gyu, the  South Korea goalkeeper into the bottom corner of the box. Thus, the goal was the decisive end to a largely disappointing matchup at Zayed Sport City.

This victory is making history for the Qatar football team.  This is because this is first time Qatar qualifies for the Asian Cup semi-finals. In conclusion, Qatar will now face the winner of the match between UAE and the Australian football team.

Place your bet on the 2019 Asian Cup Semi-Finals with VOBET and get a 10% Welcome bonus!