Here’s our preview of the Jaguars vs Dolphins NFL Week 3 matchup. The All-Florida, Thursday Night Football game, will raise the curtain on the third week of the NFL season. We’ll look at the sports betting odds and give our betting picks for the game.

The Jacksonville Jaguars are the home favorites for the game. The team is 1-1-0 straight up to start the season. They lost to the Tennessee Titans last Sunday. However, they managed to cover the spread as a 7-point underdog. 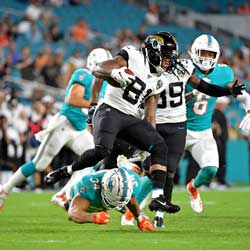 The Miami Dolphins have a terrible start this season. They are 0-2 straight up. Although they lost to the Buffalo Bills, the Dolphins still covered the spread as 6-point underdogs due to the last-minute touchdown. According to sports betting predictions, the Dolphins are 1-1-0 against the spread. Also, they have an 8.5 losing margin.

In Week 1, Jacksonville defied NFL betting odds and won against Indianapolis to get a straight-up win as the 7-point underdogs. In Week 2, they were close to getting another straight upset. However, they came short. The good news is that they covered the spread.

The Jaguars were leading late in the game before Stephen Gostowski scored a 49-yard field goal to win the game for Tennessee. Minshew got three touchdowns, two INTs, and 30 out of 45 for 339 yards. Also, it was the second game in a row in which he had three touchdown passes.

The Dolphins improved in Week 2, despite losing against Buffalo Bills. They want to get their first win in the season. If Fitzpatrick continues to hit his targets, Miami could take advantage of Jacksonville’s mediocre pass defense.

Bet on the Jaguars at -3

People who bet on football dismissed the Jaguars as the worst team in the NFL this season. However, they got the upset against the Colts in Week 1, and almost repeated in Week 2.