The Korean women’s national football team is preparing for the East Asian Football Federation E-1 Championship in July. After the Taeguk Ladies held Canada to a scoreless draw on Sunday, the team is off to a good start.

According to sports news reports, ranked 18th Taeuguk Ladies held ranked 6th Canada scoreless for ninety minutes. However, Canada had the advantage on chances on goal and possession. It had 67 percent possession and 13 shots on goal, with four on target.

Korean goalie Yoon Young-geul kept the ball out of the goal. Also, the team’s defense held off Canada’s attacks. Part of the Korean defensive team is Kim Hye-ri, who played her 100th game with the national team. 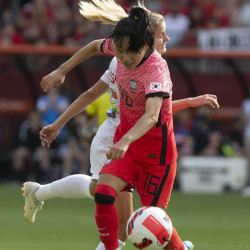 However, the scoreless draw is a concern for Canada, which won the 2020 Tokyo Summer Olympics. In addition, it is an encouraging result for South Korea. Korean head coach Colin Bell said the team must maintain pace throughout the game. It has been his concern in recent games.

Bell said they played good football. However, they need to improve their concentration in the final third. In addition, Bell said they need to increase their fitness level before starting the EAFF E-1 tournament, where they will play against teams from China and Japan.