South Korea women’s football coach wants to lead the team to its first ever Olympic football tournament. However, they lost the first leg to China, 2-1. Coach Colin Bell needs to go back to the drawing board to qualify for the Olympics.

The South Korea Women’s team needs to play a perfect game away from home. The aggregate score will determine who qualifies for the Summer Olympics. China won the first leg with a goal at the 73rd minute to break the tie. According to sports betting reports, South Korea had two defensive mistakes that led to the goals.

As per sports forum sources, away goals rules are in effect. If there’s a tie in the aggregate score, the team with the most away goals will be the winner. Thus, South Korea needs to win the second leg with a score of 2-0, 3-2, or 3-1. If they win with a score of 2-1, then it will lead to extra time and penalty shootout when needed. 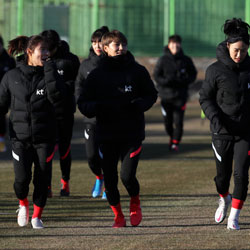 However, history is not in favor of the South Korean side. They failed to win against China in the previous six games. They had five losses and a draw. Also, they only scored two goals during those games. Their last win against China was in August 2015.

Bell said that the upcoming game is tough. However, it doesn’t change the team’s goal. They believe in their abilities and hope they can qualify for the Olympics. They have waited for more than a year for the qualifiers. Also, they don’t want the opportunity to slip from their hands.

According to soccer and volleyball betting experts, scoring multiple goals in the second leg is and exciting challenge for the team. Also, the players are motivated to win against China in the second leg.