The latest world baseball rankings by the World Baseball Softball Confederations (WBSC) are finally available! Despite the additions of 10 new teams, the new rankings are not a surprise to baseball betting Experts. For Korean National Baseball Team fans, the news is good as South Korean Baseball World Ranking Remains at No. 3.

The WBSC is the governing world baseball governing body that ranks teams according to their success.  Thus, in this latest ranking, the top team positions remain the same with Japan being no. 1 with 6,127 points. Furthermore, USA is no. 2 (4,676 points) and the South Korean Baseball World Ranking is no. 3 with 4,622 points. 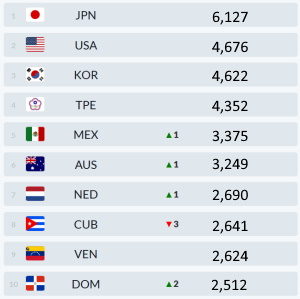 According to baseball betting news, the WBSC rankings will be the Basis for the grouping during the 2020 Tokyo Olympics. Furthermore, Japan and South Korea have qualified for the Olympics by finishing as the top teams in the Asia/Oceania region.

In addition, other qualifying baseball teams for the 2020 Olympics include Mexico as top American nation at the Premier12. During the Africa Europe Qualifying event, Israel won an Olympic spot by finishing first.

The next team that sports betting odds websites are waiting on to qualify is the USA team.  However, we will not if they qualify until the month of March.  This is because that is when the American qualifying even will take place in Arizona.  According sports betting forums, Canada, Puerto Rico, Cuba, Venezuela and the Dominican Republic will be part of the qualifying tournament.

Furthermore, the result of the American Qualifying Tournament will determine whether the South Korean National Baseball team will be in a group with Japan. If the U.S. team does not qualify, then Japan and South Korea will be in a sperate group. This because the teams with the two highest rankings in the Olympics are always in a separate group. Thus, Japan and South Korean will probably be in separate groups during the preliminary rounds.

However, if the U.S. team qualifies, then Japan and South Korea will face off each other in the opening game. According to sports betting pick experts, this outcome could be disastrous for the Korean Baseball Team.

Bet on Baseball with VOBET, the best sportsbook in the World!