Tampa Bay has a four-game winning streak going into the Buccaneers vs Texans game on Saturday. Although the Buccaneers have a hot streak, they are out of playoff contention. On the other hand, the Texans have a one-game lead over the Titans to lead the AFC South.

According to sports betting news, the initial point spread to Houston was -2. TOTAL was at 52.5. It is another road test for Houston after upsetting Tennessee last Sunday. However, they do perform better on the road with a 5-2 ATS compared to just 2-5 ATS at home. 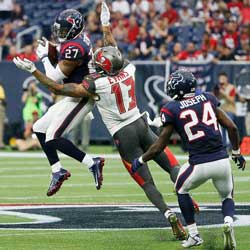 Fans who bet on football know that the Texans only need one victory to win its second division title in a row. Also, the team hasn’t ruled out the return of J.J. Watt this season. QB Deshaun Watson is in the running for the MVP award, and RB Carlos Hyde is playing the best season of his career.

Hyde played a significant supporting role to take off some pressure from Watson. He can move the chains and milk the clock to help the team win games. Football betting analysts expect him to do well against the Buccaneers.

On the other hand, Tampa Bays wants to play the spoiler role during the last couple of weeks of the season. For instance, they defeated the Colts that ended their playoff contention. They can stop the Texans’ playoff hopes this Saturday.

Houston wants to win the division title this week. That way, they can worry about their playoff position during the last week of the regular season. Also, they have a better defense than the previous four opponents Tampa Bay faced during their winning streak.