Cardinals Kim Kwang-hyun tests negative for the coronavirus as the team suffered from an outbreak. Kim is staying in Milwaukee with the team. Also, he is healthy and waiting for the continuation of the games.

The coronavirus cases led to the postponement of the team’s three-game series against the Milwaukee Brewers. As a result, their scheduled matches beginning Tuesday against Detroit were on hold. 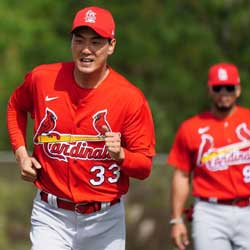 Kim Kwang-hyun joined St. Louis at the start of the season. He made his Major League Baseball debut against Pittsburgh in St. Louis on July 24, according to sports betting reports. It was the team’s first game of the MLB regular season. He got a save in the 5-4 win.

Based on sports betting odds sources, Kim will have a closer role despite an opening in the pitching rotation due to Mile Mikolas’ injury. Manager Mike Shildt said that they are confident with his skills, but some factors played concerning the decision.

Korean Sports Betting sites focused on Kim’s journey in Major League Baseball. He was a finalist for the fifth spot in the rotation that finally went to Carlos Martinez. However, he remained as a closer despite Mikolas’ season-ending injury.

He had one appearance in the season where he converted a save chance during the opening night against Pittsburgh. However, he allowed an earned run on two hits. Shildt said that things could change, especially after the recent coronavirus outbreak the team faced. He added that the starting rotation could change in the next couple of weeks.