The Pistons vs Hornets match will test whether Detroit can hold their own in rebounding after trading away Andre Drummond to Cleveland. In their first home game after the trade, they lost to New York, 95-92.

The Knicks out-rebounded the Pistons 47-28. The latter will attempt for better results when it plays against the visiting Hornets on Monday. Coach Dwane Casey told a basketball forum that Drummond spoiled the team with his rebounding ability. It is something he brought to the table, and other players took for granted. 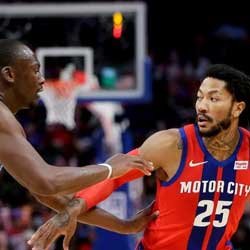 The Pistons need to fill the hole in the center if the team wants to win games. The group felt Drummond’s absence in the final minutes of the game when the Knicks were defending a two-point lead. New York got two offensive rebounds that extended their possession and allowed them to score a basket.

Pistons guard Reggie Jackson said that the team needs to figure out a way to get more rebounds. Center John Henson is one of the players Detroit got from a trade. He scored 12 points in 17 minutes.

Christian Wood is Drummond’s replacement in the lineup. He averages 22 points and 11 rebounds. However, that might not be enough to defeat the Hornets. Even with Drummond in the roster, Detroit lost three games against Charlotte this season. The Hornets will be going for a sweep on Monday.

Charlotte got Detroit’s number in recent years. To date, the Hornets have a nine-game winning streak against the Pistons. It can be number ten when they meet in Detroit. It is the perfect time to learn how to bet on basketball to place your wager on the game.

Bet on Charlotte at +3

Most basketball betting picks experts chose the Hornets to win against the Pistons on Monday.