According to a baseball forum, the ESPN KBO deal is nearing its completion. The sports network will air the South Korean baseball season to the US audience. Unconfirmed reports said that ESPN would broadcast several KBO games each week. However, the details of the contract are still unclear.

The KBO regular season will start on May 5. The league was supposed to begin on March 28. However, the league office had to cancel it due to the coronavirus pandemic. It will be the second professional baseball league to open during the outbreak. The first one was Taiwan’s Chinese Professional Baseball League.

Once completed, the deal would be a turnaround from the stalled talks between ESPN and Eclat, the international distributor of KBO games. According to sports betting odds sources, ESPN wanted free games. 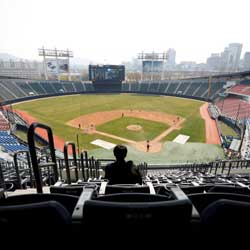 Based on baseball betting reports, ESPN was looking for a monthly contract instead of a long-term deal that will cover the entire season. The monthly agreement will allow ESPN to drop KBO if Major League Baseball starts its season.

Both Eclat and KBO were against ESPN’s demands for free games. KBO felt disrespected during the negotiations. One league official said that the KBO would work with Eclat instead of airing games on ESPN for free.

It looks like ESPN changed its stance on the subject. The sports network wanted to air KBO games to fill dead air because of the lack of live sports. When reporters reached out to Eclat, they declined to provide details of the deal. Also, they said that discussions are still ongoing.

The KBO will start its season on May 5. It will allow teams to expand their rosters from 28 to 33 players in 54 games. The standard number of players in a KBO roster is 26. Also, teams need to play 144 games, just like a regular season.

Previous Post Gorilla Kingdom Integration Mark The 4000 Games Offering by Videoslot.com
Next Post Macau April Revenues are Down by 97% because of the Coronavirus