Anthony Joshua knew his reign as the heavyweight champion was over after the final bell rang. Oleksandr Usyk upset Joshua to win via unanimous decision Saturday. Also, it was only Usyk’s third match after stepping up from the cruiserweight division.

Usyk outclassed the former heavyweight champ throughout the fight. But, according to sports news coverage, he held a clinic in fast punching and movement to win against Joshua. As a result, he became the third boxer to win titles in the cruiserweight and heavyweight divisions. The first two are Evander Holyfield and David Haye.

According to real time sports betting experts, Usyk’s win came six years after Wladimir Klitschko’s long reign in the heavyweight division. Fans in Ukraine hope the new champ’s reign will be just as long as Klitschko. 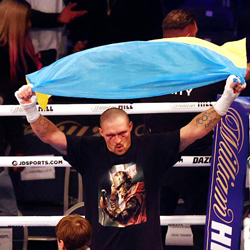 The three judges scored the match 115-113, 116-112, and 117-112, all in favor of Usyk. Also, boxing and basketball betting fans noticed Joshua’s right eye was closed when he congratulated the Ukrainian champion.

Joshua lost his IBF, WBO, and WBA heavyweight titles for the second time. The first one came more than two years ago against Andy Ruiz Jr. However, he managed to win the rematch to regain his titles.

Joshua will have a second chance to regain his title belts from Usyk due to a rematch clause. It would keep his goal alive of becoming an undisputed champion. However, he needs to train harder if he wants to defeat Usyk in the rematch. At present, Tyson Fury holds the WBC heavyweight belt.