Right-hander Lee Min-ho started the game for LG. The 18-year-old rookie got his first KBO win in his first start in the league. He threw 5 1/3 innings with one-hit ball. Aside from his first start, he already has four scoreless innings in two relief appearances in the season.

In the sixth inning, Kim Yun-sik went in as a relief pitcher. He faced struck out a batter before Jung Woo-young went in to replace him. He pitched the next 2 1/3 innings with just a single hit. The Twins had a 2-0 lead going into the ninth, which gives Lee Sang-kyu an opportunity for a save. 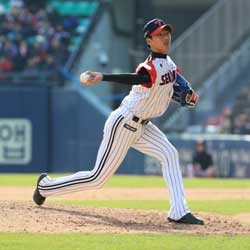 Based on Korea Wager reports, Lee was the oldest among the four LG pitchers who saw action against Samsung. The 23-year-old pitcher started with a walk. Then, he got a double-play ball and a ground out to achieve his first career save.

According to baseball news, it was the first time the Twins used three pitchers aged 20 years old or younger from the start of the game. The team drafted Lee Min-ho straight out of high school last year.

Lee Min-ho attracted attention from online gambling reporters because of his strong performance during spring training. He struck out nine batters in a row as a starter in a high school game. Last Thursday, his fastball reached 148.1 kph, which is a season-high.

He is more than just a fastball pitcher. He also has a slider. During his season debut last May 6, he didn’t throw a curveball. Also, he threw it 10 percent last Thursday.