After Mitch Trubisky recovered from his hip injury, the Bears improved their standing to 5-6. However, they fell 3-8 against the spread when they failed to cover -6 in their win against the NY Giants. Will this be the same outcome in the Bears vs Lions match?

On the other hand, Detroit suffered an upset in their last game against the Redskins. Jeff Driskel’s pass was intercepted with less than 20 seconds in the game to give the Redskins a good field position. As a result, Washington scored a field goal and gave the Lions a heartbreaking defeat. 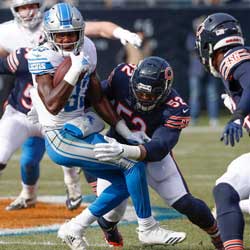 According to sports betting odds, the Lions are 1.5-point favorites as they host the Bears on Thanksgiving. Chicago Bears opened the moneyline at -111. However, it went to -120 to -125 over time.

Online sports betting sites had the total at 41. However, it dropped to 39 during the week. The games’ average total score was 34.

The Lions are 2-6 against the spread and 1-7 straight up in their last eight NFC North matches. Matthew Stafford was quarterbacking for the team during those games, except for when Detroit lost against Chicago.

It will be the first time Chicago is the road favorite since 2013 season. In their last eight games of being the favorites, they are 2-6 ATS. In the current season, the Bears are 1-4 ATS during away games.

The Bears are averaging just 15.3 points a game in the last three matches. One bright spot in the team is receiver Allen Robinson. He received 131 yards against the Giants, which is his season-high.

The offense is terrible for both teams. That’s why our sports betting pick is UNDER. They are averaging 34 points a game combined in their last three matches. Don’t expect them to score many points during Thanksgiving.