Tonight, the MLB Playoffs are heating up on the NLDS side as the Dodgers take on the Padres. In this Game 3 matchup, both sides have one win and are looking to take the lead this series. Will the Los Angeles Dodgers defeat the San Diego Padres or will they take a loss? Here is what our baseball handicapping experts have to say in their Dodgers vs Padres Betting Pick and analysis.

According to the sports betting odds providers, the Dodgers are the favorite team to win at a -125 money line. In addition, sportsbooks do not expect a high scoring game since the totals at 7. According to baseball experts, no major changes in the opening odds have been seen.

Dodgers vs Padres Betting Prediction and Analysis for 10/14/2022 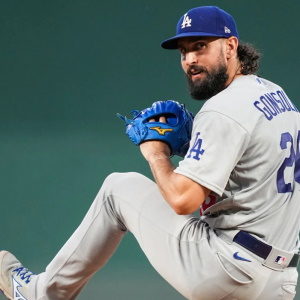 Last Wednesday, the Dodgers lost to the Padres 5-3 to tie the series despite having the home advantage. During the game, the Dodgers got 11 hits in the loss including solo home runs by Freddie Freeman. This time around, the Dodgers are travelling to Petco Park in San Diego for a tie breaking game. For this matchup, the home advantage will not make too much of a difference as it is only a 2-hour drive.

However, Game 2 of this series was not Clayton Kershaw’s best performance. This is because he went 5.0 inning while giving up 6 hits and 3 runs. According to baseball betting news, Tony Gonsolin (16-1, 2.14 ERA) will be the starting pitcher.

After two games in the postseason, Max Muncy is batting .429 to lead Los Angeles. In addition, Trea Turner has hit a team high two home runs. Together, Muncy and Turner are the leaders in RBIs with two each. Freddie Freeman is the leader in on-base percentage at .444 and Muncy is the leader in hits with three.

As o the San Diego Padres, this will be their first time hosting a playoff game in 16 years. While many baseball handicappers expect the Dodgers to win the series, the Padres are not going down without a fight.

During last Wednesday’s victory over the Dodgers, the Padres offense had 9 hits and 5 run. While they did win the game, starting pitcher Yu Darvish was not at his best. This is because he gave up seven hits and three runs. However, the team came thru keeping the Dodgers to 4 hits and zero runs in the 4.0 inning of work.

San Diego has shown a strong offense this season. However, they have lost 20 out of 37 games when they are the underdog.

Despite no longer being the favorite to win the World Series, the Dodger are still a top contender. The Dodgers have won four of the last five in San Diego. In addition, according to baseball forums, they also win 70.3 percent of the time when they are the favorite team. Therefore, we predict the Los Angeles Dodgers will win with a final score of 5-2.