Dan Straily had a dominating season in the Korea Baseball Organization this year. It looks like he will have another year to help the team reach the Korean Series. According to the Lotte Giants, Dan Straily signs new deal worth $1.2 million. It included a signing bonus of $300,000.

According to Korea Live Sports, Straily’s contract includes performance-based bonuses. However, the Giants didn’t disclose the details of the bonuses. There are reports that he can earn up to $500,000 from performance bonuses.

The right-hander had a 15-4 record with an ERA of 2.5- in 31 appearances. Also, he led the KBO with 205 strikeouts in 194 2/3 innings. Straily is the tenth pitcher in KBO history to have more than 200 strikeouts in a season. Also, he is the second foreigner to do so. 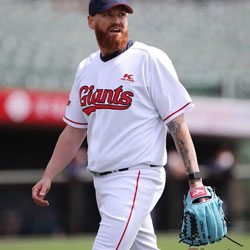 Straily led the KBO in WHIP with 1.02. Also, he ranked second in ERA and third in the number of innings pitched. According to baseball and basketball betting reports, opposing hitters batted .209 off the former major leaguer. It was the lowest by 23 points.

Based on gambling tutorials and news reports, Straily had 7.51 wins above replacement. It was the second-highest WAR achieved by a first-time foreign pitcher in the league. His teammates and fans love Straily because he tried his best to learn Korean baseball culture.

Straily became famous among KBO fans for wearing shirts with the images of his teammates. Also, the shirts became collector’s items among Lotte Giants fans. During a game, he brought clappers and a gong to lift the spirits of the bench. It was during the time KBO teams played without fans.

The KBO asked the Giants to remove the gong in the dugout. However, Straily said the gong traveled with the team throughout the season. Also, the players would strike it after every win.