The choice time is approaching for Kim Hak-bum, as he opened the last instructional course for the South Korean men’s Olympic football crew on Tuesday, eight days prior to setting his 18-man list for the Tokyo Summer Games.

Kim has called up 23 players for camp at the National Football Center (NFC) in Paju, north of Seoul. He had 30 players for the past camp hung on Jeju Island, where South Korea beat Ghana in consecutive well disposed matches. Kim cut nine players from that release of the group and acquired two new faces in advances Song Min-kyu and Kim Dae-won.

According to Korean sports betting reports, mentor Kim is booked to report his 18-man Olympic list on June 30. 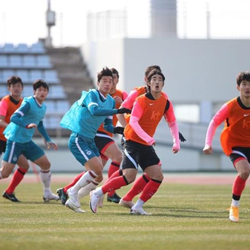 The Olympic men’s football competition is regularly open to players under 23, however as far as possible for Tokyo has been raised to 24 – players brought into the world on Jan. 1, 1997 or after – in light of the fact that the opposition was deferred by a year due to the Covid pandemic. Additionally, nations can each name a limit of three players over that age limit – informally known as “special cases” in South Korea. This implies just 15 spots are accessible for U-24 players, which just adds to the power of interior list fights across all positions.

There are three goalkeepers, eight cautious backs, six midfielders and six advances at the current camp.

Forward Lee Dong-jun, who scored in the second of two friendlies against Ghana last Tuesday, said he will accept the opposition inside the group.