FC Seoul vs Daegu FC match will take place on Friday. The two teams met 22 times in the past with FC Seoul winning 12 matches and Daegu FC with 4. Six games ended in a draw. The average goals per game between the two is 2.86.

This match features the 3rd and 5th teams in the K League. The home team FC Seoul is coming from an away loss to Ulsan Hyundai, which is the top team in the league. Also, their last home game was a defeat against Jeonbuk FC. 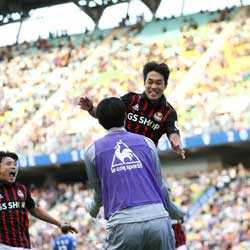 The away team Daegu FC is also coming from a loss to Suwon Bluewings. In addition, their last away game was a defeat against Sangju Sangmu.

The last time the two teams met was in June. FC Seoul won 2-1 with goals from Ikromjon Alibaev and Jung Hyeoncheol. The lone scorer for Daegu FC was Hwang Soonmin. Cesinha scored what could have been an equalizer but it was waved off for being offside. It was a good day to bet on football because of all the excitement in-game.

In May, FC Seoul also won 2-1. Daegu FC scored first but a Park Chuyoung assist to Hwang Hyunsoo tied the game. In fact, it was a late goal by Chuyoung that sealed the win for the team.

The home team will win this match because their last loss was to a higher table team. In fact, they lost by just a goal. The betting odds are in favor of FC Seoul.

Bet on football at VOBET, the top sportsbook in the world!