American football is back and this weekend, we have 14 NFL games taking place on Sunday. While the first football games are usually more difficult to predict, we are pretty confident handicapping this matchup. Therefore, we bring you our Giants vs Titans Betting Pick and prediction from our team of football betting professionals.

For this matchup, the Tennessee Titans will start their season at home against the New York Giants. The game will take place at the Nissan Stadium and the sportsbook have the Titans as a -5.5 favorite. However, since this is their first game of the season, do the Giants have any hope of covering the spread? 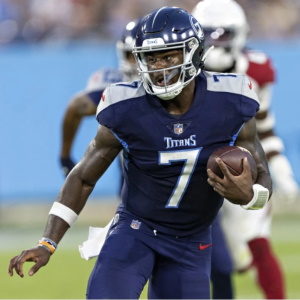 Last year, the Tennessee Titans won the AFC South with a 12-5 record but lost against Cincinnati during the playoffs. While they are not the strongest contended for the 2023 Super Bowl, bookmakers give them 35-1 odds to win it. Needless to say, they are not a pushover team that the Giants should underestimate.

It is true that many football fans did not expect the Titans to win the AFC south last year. This is because they had an average 24.2 points per game last season. However, what put them ahead of other teams is their defense which was 6 in the league last year.

Those who like to bet on football are definitively behind the Titans as they are led QB Ryan Tannehill. Furthermore, he has a great synergy with wide receiver Derek Henry. As long as Henry stays healthy, the combo will take the team to the playoffs again. In addition, Tannehill threw 14 interception last season which is the most thrown since 2013 when he had 17 interceptions.

On the other hand, the Giants is a team that does not boast a lot of confidence this season. This is because they were last in the NFL East with a 4-7 record. Of course, sports betting odds websites put the blame on Daniel Jones being out for half the season. In the games he was missing, the Giants had a 0-6 record. However, when he was on the field, they had a 4-7 record.

Bet on the Tennessee Titans at -5.5

For this matchup, the Titans are the definite home favorite. However, the point spread does not reflect it as much as it should. Therefore, this is an opportunity for Titan betting fans to make some money. Expect Tannehill to pass to Henry during the game.

While the Giants are looking to prove themselves, they are 0-6 in the last 6 gamers as an underdog. In addition, they are 0-5 in the last 5 NFL week 1 games which is a mental handicap for them. Therefore, we predict the Tennessee Titans will win and cover the spread with a final score of 28-20.