The Europa League is back with Round of 32. One of the most exciting matches football fans are waiting for is the Eintracht Frankfurt vs Red Bull Salzburg game. The first leg will take place in Germany as the Bundesliga squad will host the Austrian powerhouse.

Whichever team advances to the next round is considered one of the favorites to win the Europa League. Frankfurt got through the knockout phases of the tournament for the second season in a row. 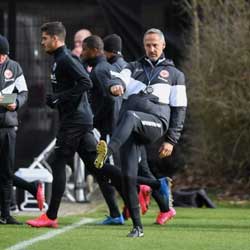 Last season, Eintracht made it to the semi-finals. However, it lost to Chelsea on penalties. The team played 96 Europa League games with a record of 54-18-24. Also, it has a +90 goal differential. However, football betting analysts don’t expect the team to advance further in the tournament this year.

On the other hand, betting odds sites are expecting Red Bull Salzburg to win the trophy despite bowing out of the Champions League. Two years ago, it reached the semifinals. However, it was eliminated in the Round of 16 last year. The team has a Europa League record of 62-16-38 with a +58 goal differential.

Frankfurt side lost to Borussia Dortmund last weekend, 4-0. They were losing by a single point going into the second half. However, Dortmund managed to score three more goals to take the win.

Before the game, Frankfurt had a five-game winning streak in 2020. Also, the team won three games in a row at home. Besides, it won six of the last ten at home.

Bet on Eintracht Frankfurt at +110

Our soccer betting predictions are for Frankfurt in the first leg of the matchup. They are playing at home, which will give them an advantage over their opponents.