Philadelphia is performing extraordinarily well at home. However, that’s not the case when they are on the road. They want to break their road losing skid during the Sixers vs Cavs game Wednesday night.

At present, 76ers have a six-game losing streak on the road. Also, it has a 13-game winning streak at home. Last Monday, the team won against Atlanta, 129-112. Leading the team was Joel Embiid with 49 points and 14 rebounds. He shot 17 out of 24 and missed only one free throw for 14 out of 15 shooting from the line.

Betting Prediction and Analysis for 02/26/20 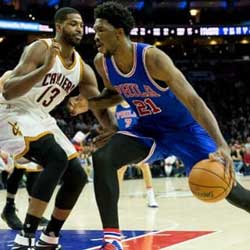 Coach Brett Brown told online sports betting sites that Embiid did an excellent job handling double teams. That was not seen in the stats sheets. He was dominant throughout the game. However, that was not the case Saturday when the team lost to Milwaukee on the road. It was the 20th defeat out of 29 games this season. Their saving grace was the 27-2 standing at home.

On the other hand, Cleveland won three of their last four games. Kevin Porter Jr. scored 30 points to win in overtime against the Miami Heat Monday night. It was a season-high for Porter, and the team was happy for the come-from-behind win.

Basketball news coverage on the Cavaliers is not that good this season. Against the Sixers, the Cavs lost three games so far, including the 141-94 massacre last December 7. It was the highest-scoring performance for the Sixers this season.

Although the Sixers have a nice run without Ben Simmons, the Cavs might come out with an upset this Wednesday night. Fans who bet on basketball know Philadelphia is a poor away team, and there are enough points to allow Cleveland to win it.