It is week 4 of the NFL preseason and our featured game is Steelers vs Panthers. The former wants to wrap up the preseason with a perfect record as they go against the Panthers. Find out what we think about the match and our sports betting pick for it.

The unbeaten Pittsburgh team is putting their undefeated preseason record on the line as they travel to Carolina. In fact, the two teams faced each other every year in preseason games since 2003. The Steelers won nine out of the 16 games, including the last two matches. 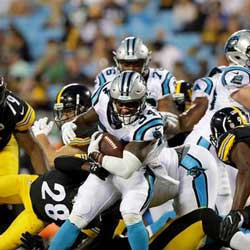 Earlier this week, the Panthers were -3.5 against the spread according to bet NFL insiders. However, they quickly became the underdogs when the team reported Cam Newton’s injury. As a result, the Steelers are heading into the game as the road favorites.

In addition, sports betting odds makers agree that the Steelers want to close out their preseason on a position note. As a result, the team are favorites to win cover and straight up. In fact, the Steelers are coming from an 18-6 win against the Tennessee Titans last week.

Also, the last Steelers’ game was Ben Roethlisberger’s first preseason game. He is raring to show what he can do in the upcoming season. His 17-yard touchdown pass to Juju Smith-Schuster showed what their offense will look like in the regular NFL season.

On the other hand, the Panthers is coming from their second defeat in a row after winning their first preseason game. Newton and Will Grier didn’t have any touchdowns during their last game. To make matters worse, Newton limped off the field wearing a walking boot.

The Steelers might treat it like a regular-season game as they try to finish their preseason on a 4-0-0 record.