Kim returned to Korea after a training stint in the US. According to sports news reports, Kim signed with the Pink Spiders. Also, the one-year contract is worth 700 million won or around $542,000.

According to volleyball and football betting experts, the last time Kim played for the Incheon Heungkuk was in the 2020-2021 season. It was her first time playing in the local V-League after spending 11 years playing overseas. 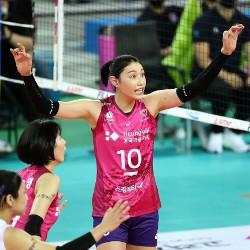 Kim spent the 2021 season in Shanghai to play for the Shanghai Bright Ubest Women’s Volleyball Team. She led the team to the top of the Chinese Super League in the 2017-2018 season. Also, the team finished in second place that season.

After the first training session with the Pink Spiders, Kim said she would strive to adapt to the team. Also, she’ll try her best to play well this year and help the team.

It will be the first time the V-League will how summer friendlies since the start of the pandemic. Although the friendlies are not part of the regular season, it allows players and teams to test their skills against each other.

There will be a total of six friendly matches with two games daily. Also, each game will have four sets. The Pink Spiders said that they would look at Kim’s form during training to determine if she’s fit for the friendlies.