Captain of the South Korean national football team Son Heung-min is the nation’s top football player of the year. The Korea Football Association announced the winner of its yearly wards Wednesday.

Son won the award for the sixth time, which is a record. Also, he won it for three straight years. According to football betting experts, Son earned four goals in seven appearances for the national squad. At club level, he scored 22 goals in all competitions for Tottenham Hotspur.

The KFA said 52 journalists and 26 KFA technical officials voted on the winners. According to betting odds reports, votes of the KFA officials weighed double. Son got 253 points with Kim Min-jae in second place.

Top Football Player of the Year 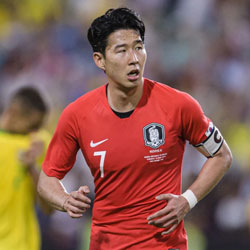 Son got 47 out of 52 votes from journalists. On the other hand, Kim got 13 out of 26 votes from KFA officials. People who bet on sports favored Son to win the award.

Ji So-yun won the Female Player of the Year. Also, she won the award for the sixth time. She helped Chelsea FC Women to win both the English league and FA Cup titles in 2021. In addition, the team was second in the UEFA Women’s Champions League.

At present, Ji is the nation’s all-time leading scorer across all divisions, competitions, and genders. Also, she joined the national team at 15 years old to become the youngest ever member of the women’s national team.

Ji scored her 59th goal for the nation on September 18 at the AFC Women’s Asian Cup qualifier against Mongolia. As a result, she overtook Cha as the country’s all-time leading scorer. However, she never won a trophy with the Women’s National Football team. Their best finish was 14th place in the 2015 World Cup in Canada.