On June 9, the world will witness the Shakur Stevenson vs Felix Caraballo fight at the MGM Grand. However, the former’s WBO featherweight championship will not be on hand. They will fight at 130.

Caraballo has been fighting as a featherweight his entire career. Although he isn’t happy about the sacrifices he needs to make for the match, Caraballo knows that it is for the good of his pro career. Caraballo will fight above his preferred weight class and with no belt on the line. However, he told sports betting reporters that the fight is worth the risks. 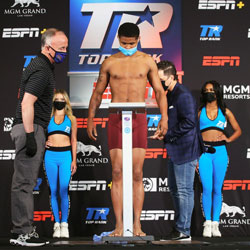 Shakur Stevenson won the WBO world featherweight title against Joet Gonzalez last October 26, 2019. Based on sports news articles, he called himself the next Floyd Mayweather Jr. Heading into the title match, Gonzalez was undefeated with a record of 23-0.

On the other hand, Caraballo has an impressive fight record of 13-1-2 with nine KOs. His last win was against Sergio Lopez last January 25. It ended with a TKO in the first round. Also, he is in a five-game winning streak.

Bet on Stevenson to Win via KO

Caraballo often leaves himself open, and that can be his weakness going into the match. Stevenson will win the fight by going the distance or through a unanimous decision. If you are betting on props, bet on the fight lasting up to at least six rounds.