Although he didn’t start the season as part of the starting rotation, Kim Kwang-hyun proves worth to be in the Cardinals’ rotation. At the start of the season, he was the closer. However, he thrived when he moved into the rotation.

In his four starts, Kim gave up only one run in 20 2/3 innings. Also, he has an ERA of 0.44. In the game against Cincinnati Tuesday, the left-hander shut out five innings to help the team win with the final score of 16-2. He was a record of 2-0 after getting the win against the Reds.

As a starter for the Cardinals, Kim allowed 12 hits. Also, he struck out 11 batters and walked six players. Opponents earned four extra-base hits against Kim during that period. Kim was the MVP in the Korea Baseball Organization, where he spent 13 years as a starting pitcher.

Kim Kwang-hyun Proves Worth as Starter 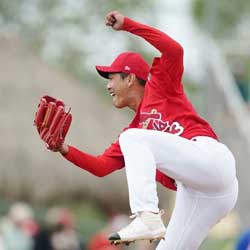 Kim signed a two-year contract with St. Louis last winter. However, the team failed to guarantee him a spot in the rotation. According to sports wagering news, the Cardinals said that Kim would have a chance to be part of the rotation in spring.

During spring training, Kim threw eight shutout innings. However, the pandemic happened. Thus, the MLB had to postpone the start of its season. During the summer camp, Kim became closer and earned a save. According to online sports betting sources, the Cardinals were grooming him to be the team’s closer.

Fans who bet on baseball noted that Kim earned a save during his MLB debut against the Pirates. He gave up two runs to hold a 5-4 win for the team. However, the Cardinals had to undergo a two-week hiatus because a member of the team tested positive for the coronavirus.

With injuries affecting the rotation, coaches had no choice but to tap Kim. Since then, the South Korean pitcher is impressive as a starter.