Son Heung-min is the backbone of the South Korea national football team. It is not a surprise that the nation called him up for two international games in November. However, many fans wonder what the team captain’s mindset will be going into the matches.

Tottenham Hotspur’s forward was inconsolable after his late tackle on Andre Gomes led to a gruesome injury. After he was sent off, Son was inconsolable. He was crying a lot in the locker room.

Son will only have several days to recover mentally before the South Korean steam goes to Beirut to play against Lebanon in a World Cup qualifier on November 14. Then they will play Brazil in an international friendly in Abu Dhabi on November 19. Fans betting on sports want to know if Son is 100 percent mentally during those games. 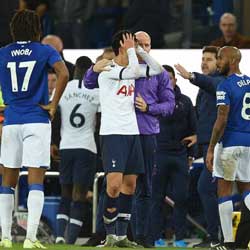 South Korea national football coach Paulo Bento is aware of the incident and said he knows Son didn’t have any ill intentions when he tackled Gomes. Bento, who comes from Portugal, wishes fast recovery for his countryman.

Bento told sports betting pick reporters that Gomes’ injury was unfortunate. He doesn’t want to see anyone injured, no matter what the nationality of the person. However, injuries are part of the sport. He hopes Son moves forward soon. He added the national team would be there to help him the best they can.

Bento will talk about with Son Heung-min about the incident once the Tottenham Hotspur forward reports to the national team training camp. However, he doesn’t have any plans to bench the player for him to recover his mental state.

The national football team coach knows Son is having a hard time after hurting a fellow player unintentionally. However, he needs to find the strength to move on and take part in practices and matches.

If you enjoy South Korean soccer, then bet Suwon Samsung Bluewings, which is currently campaigning against relegation in the K-League.

Bet on the K-League with VOBET, the best sportsbook in the world!