The Green Bay Packers host the Detroit Lions on prime-time Monday night. The Lions vs Packers game will close out Week 6 of the NFL regular season. 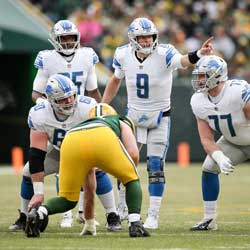 Betting odds for the Lions vs Packers game are in favor of Green Bay. The Packers are coming from a win against Dallas in Week 5. In fact, Aaron Rodgers threw a total of 238 yards without touchdowns on interceptions. For the season, the Packers quarterback has six TDs and one interception.

According to football betting sites, the Packers are leading the NFC North with a 4-1 record. When playing at home, the team is s2-1. Also, they covered four out of the five games so far. Green Bay is eighth in the league for average allowed points per game at 18.6 points.

Detroit Lions also have a good start for the season. They are currently second in the NFC North with a 2-1-1 record. In their last game, they lost to Kansas City 34-30. For the season, Matthew Stafford has nine TDs and two interceptions.

Detroit is 1-0-1 on the road and 1-0-1 against conference teams. The team is seventh in the NFL for average passing yards per game at 267. Also, the Lions covered two of their last games this year.

It is the best time for Aaron Rodgers to shine. Detroit’s defense is weak against passes and will bring them problems throughout the game. That’s why our betting pick is the Packers to cover ATS 31-24.