This Sunday, the Philadelphia Eagles will be playing against the Denver Broncos in enemy territory. For this NFL Week 10 game, many football betting fans believe this matchup will be an easy pick. However, is this really the case even if the Broncos having the home advantage? Let’s fid out with our Eagles vs Broncos Betting Pick prediction.

This NFL Sunday, the Eagles are playing with a 3-6 ranking in the NFC East. On the other hand, the Broncos are 5-4 in the AFC West and tying for last place with the Chiefs. According to sports betting odds, the Broncos are the favorite team at -2.5 and a -150 moneyline. 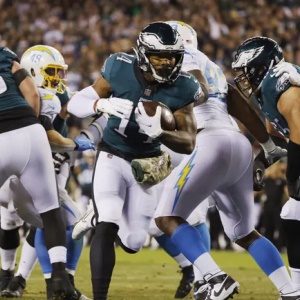 At the beginning of the week, the online sports betting websites had the Broncos at -1.5. Since then, confidence for the Eagles has gone down with most bettors placing their wagers on the Eagles. Is this simply public perception or an actual foreshadowing of the game?

Last week, Eagles went down in ranking after losing 27-4 to the Los Angeles Chargers. During the game, Jalen Hurt, the QB for the Eagles had 162 yards in passes and one touchdown. For their offensive power, they had 331 yards in total offense but gave up 445 yards to the Chargers’ offense.

This season, Jalen Hurt has a total of 1,981 yards, 11 touchdowns and 4 interceptions. He is also the leading rusher for the Eagles with 494 yards and 5 touchdowns. In addition, DeVonta Smith is their leading receiver with 537 yards and two touchdown receptions. For defense, they have linebacker Alex Singleton, with 83 tackles while Javon Hargrave is the leader quarterback sacks with 6.

On the other hand, we have the Denver Broncos who have the home advantage at Empower Field At Mile High. The Broncos are last in the AFC West but only by half a game behind the Chargers and the Raiders. Furthermore, they just had a 30-16 victory las Sunday against the Dallas Cowboys.

Ted Bridgewater has a total of 2,163 passing yards for the season with 14 touchdowns and 5 interceptions. Furthermore, their leading receiver is Courtland Sutton with 588 yards and two touchdown receptions.

Even though the sports handicappers have the Broncos as a favorite, when it comes to betting, the difference is obvious. First off, while the Eagles lost their last game, the team is playing well under the leadership of Jalen Hurts.